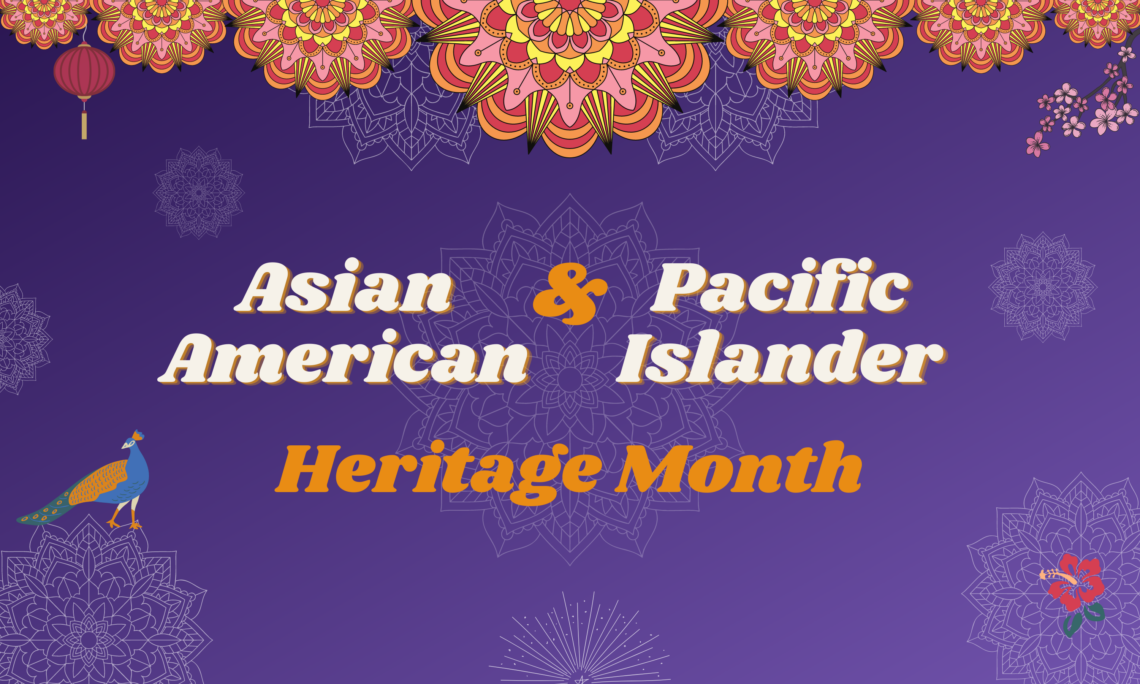 Did you know that May is Asian American Pacific Islander (AAPI) Heritage Month? Since President Carter issued Proclamation 4650 in 1979, May has been designated to pay tribute to the collective contributions and accomplishments of generations of Asian/Pacific Americans in American culture, history, and society.

Being an Asian fresh off the boat, I recently found out about this celebration and was thrilled to know that while I have been reading Asian literature since my childhood, there is so much more left to explore, especially from the immigrant perspective. In the last few years, I also started exploring literature other than my own South Asian heritage and more focused on the stories from regions like Japan, China, Korea, Syria, Hawaii, etc. This in many ways has been an eyeopener, to say the least. Honestly, it is not even the tip of the iceberg. Moreover, I have often had conversations with some of my Asian friends who state that they only read American or European literature and haven’t dived into exploring other parts of the world yet. To them I want to say, while it is a personal choice, I still highly recommend reading AAPI books and learning more about your own roots, and familiarize yourselves with some of the best and gifted writers in literature!

While it is important to celebrate and acknowledge accomplishments of all cultures all year long, May is a wonderful time for readers to be introduced to and read more literature that highlights Asian/Pacific American cultures. So here I am doing one of my favorite things – recommending some great books for you to choose from.  If any of these books catch your eye, think about purchasing them from an AAPI-owned bookstore.

Below are #AAPI books & authors I loved exploring recently:

The Map Of Salt And Stars by Zeyn Joukhadar

There are some books you want to read, and there are some books you need to read. This is one of those! Author Zeyn Joukhadar is a member of the Radius of Arab American Writers (RAWI). The Map of Salt and Stars is his remarkable debut with a sweeping, thrillingly ambitious tale of Nour, Rawiya, and their parallel searches for home. In twin narratives that unfold eight hundred years apart, Joukhadar captures the unrelenting courage of those who persist amid the trials of exile. It is a deep immersion into the richly varied cultures of the Middle East and North Africa and is to Syria what The Kite Runner was to Afghanistan. It is currently being translated into twenty languages, was a 2018 Middle East Book Award winner in Youth Literature, a 2018 Goodreads Choice Awards Finalist in Historical Fiction.

“E. M. Forster taught us that ‘fiction is truer than history because it goes beyond the evidence.’ Jennifer Zeynab Joukhadar’s magic first novel is a testimony to that maxim. We’ve all been aware of the plight of Syrian refugees, but in this richly imaginative story we see one small family – both haunted by history and saved by myth – work their way west. It’s beautiful and lovely and eye-opening.”

The Committed by Viet Thanh Nguyen

The sequel to The Sympathizer, which won the 2016 Pulitzer Prize in Fiction and went on to sell over a million copies worldwide, The Committed published recently in March this year, tells the story of “the man of two minds” as he comes as a refugee to France and turns his hand to capitalism. It  follows the Sympathizer as he arrives in Paris as a refugee. There he and his blood brother Bon try to escape their pasts and prepare for their futures by turning their hands to capitalism in one of its purest forms: drug dealing. The new life he makes has dangers he has not foreseen, from the oppression of the state, to the self-torture of addiction, to the seemingly unresolvable paradox of how he can reunite his two closest friends, men whose worldviews put them in absolute opposition. Both literary thriller and brilliant novel of ideas, The Committed is a blistering portrayal of commitment and betrayal that will cement author Viet Thanh Nguyen’s position in the firmament of American letters.

“I was a little person who spoke an immigrant version of his language, the language of a country that basked in the best of both worlds: to have once been an imperial power that had mugged weaker countries at gunpoint, while no longer being an imperial power and having to deal with pesky things like mosquitoes and malaria or resentment and revolutions.”

Good Talk begins with a child’s innocent questions about race and evolves into an honest, direct, and heartbreakingly funny journey. Mira Jacob’s touching, often humorous, and utterly unique graphic memoir takes readers on her journey as a first-generation American. At an increasingly fraught time for immigrants and their families, Good Talk delves into the difficult conversations about race, sex, love, and family that seem to be unavoidable these days. In Jacob’s brilliant hands, we are gifted with a narrative that is sometimes hysterically funny, always honest, and ultimately healing. It has been named One of The Best Books of The Year by – Chicago Tribune, The New York Public Library, Publishers Weekly, The New York Times Book Review, Time, BuzzFeed, Esquire, Library Journal, and Kirkus Reviews. Do I need to say more?!

“How brown is too brown? “Can Indians be racist?”

“What does real love between really different people look like?”

Tiller is an average American college student with a good heart but minimal aspirations. Pong Lou is a larger-than-life, wildly creative Chinese American entrepreneur who sees something intriguing in Tiller beyond his bored exterior and takes him under his wing, bringing him along on a trip across Asia. In the breathtaking, “precise, elliptical prose” that Chang-Rae Lee is known for, the narrative alternates between Tiller’s outlandish, mind-boggling year with Pong and the strange, riveting, emotionally complex domestic life that follows it. Tinged at once with humor and darkness, electric with its accumulating surprises and suspense, My Year Abroad is a novel that only Chang-Rae Lee could have written, and one that will be read and discussed for years to come. Author Chang-Rae Lee is a Korean-American novelist, winner of the  Hemingway Foundation/PEN Award for first fiction, winner of the Dayton Peace Prize and a finalist for the Pulitzer Prize.

“An extraordinary book, acrobatic on the level of the sentence, symphonic across its many movements—and this is a book that moves…My Year Abroad is a wild ride—a caper, a romance, a bildungsroman, and something of a satire of how to get filthy rich in rising Asia.”

Acclaimed literary essayist T Kira Madden’s raw and redemptive debut memoir is about coming of age and reckoning with desire as a queer, biracial teenager amidst the fierce contradictions of Boca Raton, Florida, a place where she found cult-like privilege, shocking racial disparities, rampant white-collar crime, and powerfully destructive standards of beauty hiding in plain sight. With unflinching honesty and lyrical prose, spanning from 1960s Hawaii to the present-day struggle of a young woman mourning the loss of a father while unearthing truths that reframe her reality, Long Live the Tribe of Fatherless Girls is equal parts eulogy and love letter. With several awards and relentless praise under its belt, it is searing, vivid, and deeply thoughtful. You simply have to read it!

“In essays written with raw and fearless prose, Madden asks the questions to which we all seek answers. In so doing, she honors fathers and mothers and families; the ways they love, and the ways they fail.”

Here is an irreverent, poignant, and often hysterically funny debut novel by an amazing new voice! Following two families from Pakistan in the 1990s, and Iraq to San Francisco in 2016, The Bad Muslim Discount is a hilarious, timely, and provocative comic novel about being Muslim immigrants in modern America.  Anvar Faris, a restless, rebellious, and sharp-tongued boy along with his brother and parents move to California to escape the control of fundamentalists in their country and their desi experience is extremely relevant to all South Asians be it in Asia or America. With deep insight, warmth, and an irreverent sense of humor, author Syed M. Masood examines universal questions of identity, faith (or lack thereof), and belonging through the lens of Muslim Americans. For fans of Hanif Kureshi, Mira Jacob, and Mohammed Hanif this is a perfect read!

“My point,” she said, “is that all your heroes were wanderers upon this earth. Moses, Jesus, Abraham, Jacob, Joseph, Ishmael, Muhammad…The history of the world is the history of people who went places. People who walked to the horizon.”

The Incendiaries by R. O. Kwon

This is author R. O. Kwon’s debut novel, named Best Book Of The Year in 2019 by over forty publications. It is a powerful, darkly glittering novel of violence, love, faith, and loss, as a young woman at an elite American university is drawn into acts of domestic terrorism by a cult tied to North Korea. Phoebe Lin and Will Kendall meet in their first month at prestigious Edwards University. Phoebe is increasingly drawn into a religious group—a secretive extremist cult—founded by a charismatic former student, John Leal. He has an enigmatic past that involves North Korea and Phoebe’s Korean American family. Meanwhile, Will struggles to confront the fundamentalism he’s tried to escape, and the obsession consuming the one he loves. The Incendiaries is a fractured love story and a brilliant examination of the minds of extremist terrorists, and of what can happen to people who lose what they love most.

“Kwon’s lush imaginative project … [is to expose] the reactionary impulses that run through American life…[creating] an impression of the mysterious social forces and private agonies that might drive a person to extremes.”

If you could say it in words, there would be no re

#Saturdays are what I look forward to: spending ti