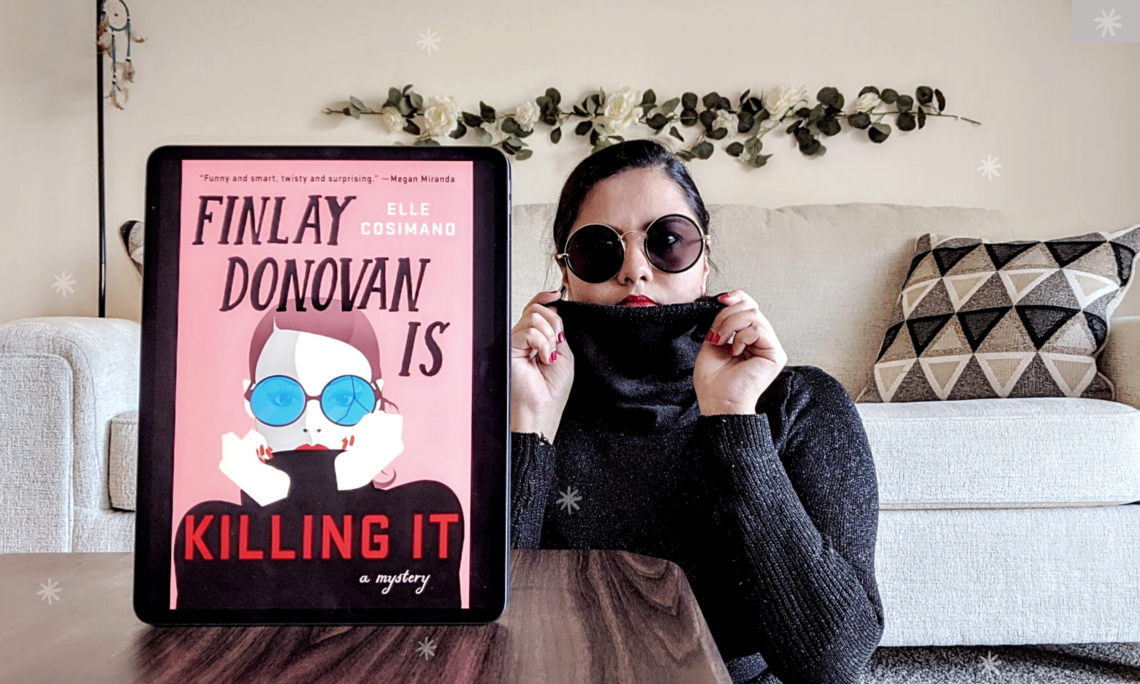 “It’s a widely known fact that most moms are ready to kill someone by eight-thirty A.M. on any given morning. On the particular morning of Tuesday, October eighth, I was ready by seven forty-five. “

Reading a delicious suspenseful mystery novel is my bookish heaven where I love to get lost (and not be disturbed). And Finlay’s story was just that! Finlay Donovan Is Killing It by Elle Cosimano is a dark comedy meets murder mystery meets motherhood diaries meets romance. It is a great balance of all these and flows smoothly from chapter to chapter making us be curious, entertained, and laughing along the way. Here is the synopsis:

Finlay Donovan is killing it . . . except, she’s really not. She’s a stressed-out single-mom of two and struggling novelist, Finlay’s life is in chaos: the new book she promised her literary agent isn’t written, her ex-husband fired the nanny without telling her, and this morning she had to send her four-year-old to school with hair duct-taped to her head after an incident with scissors.

When Finlay is overheard discussing the plot of her new suspense novel with her agent over lunch, she’s mistaken for a contract killer, and inadvertently accepts an offer to dispose of a problem husband in order to make ends meet. Soon, Finlay discovers that crime in real life is a lot more difficult than its fictional counterpart, as she becomes tangled in a real-life murder investigation.

Fast-paced, deliciously witty, and wholeheartedly authentic in depicting the frustrations and triumphs of motherhood in all its messiness, hilarity, and heartfelt moment, this is a brilliant new book from YA Edgar Award nominee Elle Cosimano.

I was swept away in a world of mystery where Finlay and her former nanny/accomplice are only just beginning with their antics and bad decisions. We’re introduced to a fresh, lovely character: A struggling, broke, drowning in debt, single mom, and suspense novelist Finlay Donovan. She is sick of piling bills, her ex-husband’s threats: how can she concentrate on her job and write a best-selling crime novel? But what if she accepts an offer that could not only solve her financial crisis but it also turned her life more dangerous than the books she has written? Her fiction may or may not be inspired by events in her own life. This book-within-a-book approach is interesting and makes everything believable even if not relatable. Finlay’s approach to her problems may be questionable, but her predicaments as a single mom and struggling author are very relevant and make you feel really connected to her.

With her resourceful accomplice a.k.a nanny Vero, she finds herself investigating real-life crimes through her unconventional approach. Gritty, realistic crime fiction this is not. Finlay makes a few choices early that you just have to accept in order to get into the story. But the story works because Finlay is a well-developed character who you can’t help but root for, and her partnership with Vero is consistently hilarious and full of snarky banter. If you’ve ever told your best friend, “I’d bury a body for you”, watch out for how that commitment plays out with Vero’s character and her daring support for Finlay.

I won’t dive into the remaining plot details, because it’s better to discover all the twists and turns for yourself, but I will note here that I was impressed with how author Elle Cosimano tied up the threads of this seemingly impossible scenario Finlay finds herself in towards the end.

It is such an original plot that it was refreshing for even a crime junkie like me. The ending is very well executed leaving a lot of room for the story to go further, hinting at a follow-up (Elle has announced that it will be a series!). Well, this plot certainly has the ropes of a highly entertaining series in the making.

I was thrilled to connect with Elle to ask some of my questions about this book and her writing process for it. Here are her responses:

# I love that your book is a rare amalgamation of thriller, crime fiction, romance, and dark comedy. Was this a conscious decision or did it feel natural for you to write?

I was first published in the YA market, where genre lines are crossed and blurred more often than not, so coloring outside of genre lines comes naturally to me. It’s an aspect of YA I’ve always loved—the disregard of genre rules—and I’m overjoyed that readers of Finlay Donovan are embracing it.

# While most murder mysteries have clear outlines with a murderer and a victim, yours is very witty in blurring those lines. Did you enjoy shaping such characters and subplots that make questionable choices and are yet extremely relevant?

In each of my books, I’ve played with this theme of how we define good vs bad people. My bad guys aren’t always entirely evil, and my good guys are often deeply flawed. In mysteries, I find this makes the whodunit more difficult to solve. But in any genre, this blurring of the lines between good and bad feels more authentic to me. Good and bad, wicked and just, heroes and villains… In real life, these labels are often misleading, the truth behind them rarely clearly defined, and I try to paint realistic characters, even in the most unrealistic of stories.

# Re-claiming one’s identity is a huge underlying theme in this book. How did your own life experiences help in forming Finlay’s story in that perspective?

Motherhood is a constant cycle of redefining and rediscovering ourselves. As our children grow from one developmental stage to the next, their needs change. And as the demands of motherhood change, we’re forced to adapt and change to meet them—as women, as caretakers, as romantic partners…. As a mother of two young men, I’ve stood in Finlay’s shoes, as well as the shoes she’s yet to step into as her own children continue to grow, so I know what it feels like, to find yourself just as that stage of your life is slipping away and you’re becoming someone new.

# This book is a comedy of errors for Finlay and her unlikely accomplice Vero. The theme of women’s friendships and being literal partners in crime is phenomenal. Why was it important for you to add this dimension to the story?

The inspiration for this story (and the motivation to write it) can be credited in large part to the encouragement of my critique partners, Megan Miranda and Ashley Elston. I wanted this book to be about women lifting and supporting other women, and I’m very fortunate to have two writing friends who have supported me unconditionally throughout my career. I wanted Finlay to have that same kind of friendship—someone who would push her to become the best version of herself.

# Statistically money plays a strong role in determining life quality, status, and respect in society. Finlay and Vero experience that as their lives change through the course of the book. What are your thoughts on the motivation of money and power while committing crimes mentioned in the book – be it the mafia or people in general?

Finlay has learned through the course of her career that people (even those who love her) judge the value of her occupation by how lucrative it is. No matter how hard she works, no one really takes her job as an author seriously until the money starts rolling in. Suddenly, she’s earned the respect of those around her, even those who had been critical of her job before. While Finlay’s sole motivation in committing the crimes—and the book she wrote about them—was to protect and care for her family, the people around her have begun to treat her with more worth and value, celebrating her success, but would they feel the same way if they knew the truth about how that money found its way to her bank account? Finlay’s situation raises interesting points about the contributions and roles we value as a society.

If you are a Crime Fiction and Mystery lover, you should definitely check out my recommendations for Women’s Crime Fiction commemorating the best literary detectives solving crimes. Did you enjoy Finlay’s story? Share your thoughts and your personal favorite crime fiction books in the comments below! ?